Bien’s musical journey began as an organ student at the age of 6. With the music theory he learned, Bien was able to play organ pieces from the swing, classical, baroque, jazz and rock eras. Then in his early teens, he moved onto the electric guitar, and learned from diverse guitar-driven music such as Led Zeppelin, Van Halen, Def Leppard, Deep Purple and The Rolling Stones.
Bien went on to study audio recording/engineering at Five Towns College, and jazz guitar with Ray Gogarty. He was then granted an internship at The Music Palace, a recording studio, working for major recording artists such as Mariah Carey, Billy Joel, Phil Ramone, and Tool. He eventually was hired at Long Island Rock Rehearsal studios as Chief Audio Engineer. Bien would oversee all rehearsals and pre-production projects for local musicians, bands, national acts and major touring musicians, such as members of Black Sabbath, Foreigner, Rainbow, The Cars, and Blue Oyster Cult. Many of these sessions would result in late night jams at the studio with these seasoned musicians encouraging Bien to find his voice as a guitar player. One of them was Gina Stile, now a member of 80’s Pop/Rock band, Vixen. Bien took her offer for guitar lessons and in a short time, his playing improved dramatically.
By 1995, Bien’s band, Wax Poetic, was offered an Indie label deal, and released their own self titled CD with Bien co-writing all 12 songs and expressing his voice on many of the guitar solos. The album had a local hit titled Sweet and Tender Girl. Following that release, they performed with Grammy winning artists, Blues Traveler and Dave Matthews Band. When the band wasn’t performing or recording, Bien began teaching guitar locally.
And today, many years later, Bien continues to perform, host open mic nights, mentor youth music programs, and is regularly hired at recording sessions with local songwriters. He remains a student of the guitar, always learning new music and techniques. Bien has a passion for teaching his students and is grateful to help them find their voice on their instrument. 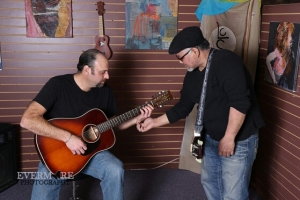 Just taking a moment to Thank you for the wonderful guitar lessons. My Leigh-Ann looks forward to your Guitar lessons. She said you make learning the guitar fun and loves the jam session part of each lesson. You give her a chance to be creative. As a Mom, I love the passion you have for the guitar and appreciate you sharing that with her.

Till Next week’s lesson!