Monica Garcia-Albea started out as a flute player, but received her Master’s Degree in Vocal Performance/Opera at Boston’s New England Conservatory. She then moved to Berlin, Germany, where she sang in established opera houses, most notably with the two-time “Best Choir of the Year” in the Deutscher Oper Berlin. However, she was from the beginning, always drawn to jazz, improvisation, and movement courses, and as a free-lance artist in Berlin, Monica left her mark in the cross-over “off-opera” scene. Her career break came with the leading role of “The Magic Flute in the Subway”, an internationally acclaimed production that integrated a rock singer, contemporary dance, and video projections. As a voice teacher in Berlin, Ms. Garcia-Albea built a reputation for implementing pop music, Alexander Technique, yoga, ball-games, and dancing in her lesson plans, and for switching musical eras at the drop of a hat. In 2013, when she began her own music theory/ piano/flute teaching business in New Jersey, Monica tried to import this out-of-the-box thinking, and had a great following of students, parents, and friends. Popsical School of Performance and its holistic view of music education is for her a natural extension of all her years of training and experience. Monica Garcia-Albea is now exploring songwriting and plays/sings/records with local bands and musical theater troupes. 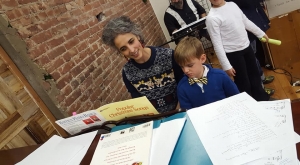 “We are so pleased to have found Monica to teach Piano to our 8 year old daughter Erin. Every week Erin is looking forward to her lesson and she really seems to enjoy learning as Monica makes the lessons fun for her. There seems to be a perfect balance of discipline and creative play that keeps Erin not only interested, but excited to learn! We could not be more satisfied.”

Very professional and very kind. I hope my daughter could learn singing and flute from Ms. Monica in the future too. Thank you, Ms. Monica!

Monica is a great instructor. She instructs a lot of children and has tons of patience and a great sense of humor – I’m an adult and this patience and humor carries over to my age group as well. She’s excellent with all types of music on the piano and vocal coaching as well – she’ll learn anything you want and teach it back to you – she’s tough too, make sure you do the basics, and you’ll get a lot out of her instruction.